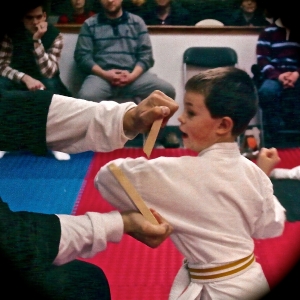 My son started karate when he was 5 years old in the “Little Masters” program at National Karate, Arden Hills. He loved it from day one and broke a board a board at age 6 in front of a crowd of people. During the first year, I watched almost every lesson from the observation gallery. Sometimes I made comments. Sometimes I tried to explain things. Sometimes I gave encouraging looks, and, yes, I admit, I also gave judgmental frowns and occasionally barked a correction. I knew better, but would get caught up in the moment.

Ninja parents are the karate version of helicopter parents. They’re always watching and jump out of hiding to rescue their kids, fight their battles or get involved when they don’t really need to be. While I don’t really consider myself a ninja parent (who does, right?), I realized I was starting to act like one when I caught myself making comments from the parent gallery. It’s almost always a bad idea. Here’s why:

Think back to when you were a kid and your parent stuck his or her nose into you and your friends business. How embarrassing, right? Even if you have a very young child in karate or another sport, it’s important to remember that this is a time when he wants to see himself as strong. This is his chance to put his game face on. There’s no better way for me to screw that up than to chime in with advice about how to correct his form or execute his move.

Even “encouragement” isn’t really all that helpful. If he does something good, he already knows it. I need to let him enjoy his moment of accomplishment and soak in the satisfaction that comes with it. If I bust out with all sorts of praise and affirmation (even non-verbal), I run the risk of making my kid’s success dependent on my approval. He can start to always look to me for a thumbs-up or thumbs-down about everything he does. I’ve learned to save my affirmation for after the lesson and let him relive the moment again in the car on the way home.

This lesson the hard way with my son. I had the bad habit of shooting him a frown during the lesson if he was being lazy or sloppy. I’d also give him a nod if he did something good. He started looking over at me after every move to see what I was thinking. This caused the most problems when he was sparring, because in the moment that it took for him to look over and “check in” with me, his partner usually threw a kick or punch and scored a point. Besides that, he wasn’t rating his own performance and self correcting. He was constantly looking to me.

But what if my young karate kid gets frustrated and starts to cry? What if the instructor is being too hard on him? What if he loses it and gets angry?

When these situation come up, it’s important to keep in mind that the student/instructor role is a subtle dance, especially in karate. Karate instructors are like coaches, teachers, role models, and trainers all wrapped into one. When they’re working with little kids, they walk the line between pushing and praising. Let your child and his instructor develop their own relationship. It will be something they value. Sometimes instructors might be tough on them (just like you). Sometimes they won’t push hard enough. That’s okay.

Karate instructors are long-term. Kids often stay with the same teachers for many years. They grow up with them. This kind of long term relationship has GREAT benefits and goes through different seasons at different times. Unsolicited “help” from the parent gallery sends the message to your child that you lack confidence in his or her ability to understand the relationship and grow with it. It sabotages the subtle dance between student and instructor.

I don’t watch every lesson anymore. I stop to observe now and then, so I can be connected and help my son celebrate his achievements.  Children learn best when they can, for the most part, work out their challenges and solutions themselves. It can be frustrating to hold back, but it’s also very rewarding.

Posted by Joshua Koepp on October 22, 2013 in Present Moment Parenting