Being the Angry Dad 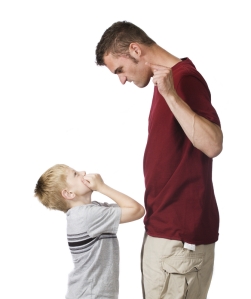 I was talking with a friend about the effects of anger on kids. This is an important topic for me, because I have been the crabby daddy. When I saw the effects that my anger was having on my family, I knew something needed to change.

Most of us know what it’s like to get angry at our children once in a while. That’s just part of being a parent. In fact, many of us can remember times when our parents got angry with us. We can also probably remember times when we knew we “had it coming.” No, I’m not attempting to justify parents losing their temper. What I’m getting at is that most of us pushed our parent’s buttons a little bit to see what would happen, and most of us have also had our buttons pushed by our kids. That’s a  normal part of kids learning about boundaries and emotions.

However, there are some of us who also know what it’s like to live under a dark storm cloud of parental anger that’s always there and always threatening to burst into a full blown thunderstorm of raging tantrums. We’ve had to walk on egg shells to try to keep the wrath from coming, and we knew that no matter how careful we were, it would eventually come anyway. There are some of us who know the physical impact of out of control anger.

One parent told me, “I lose my temper once in a while, but even though I get angry a lot, it’s usually under control.” This statement hit me hard, because it’s how I used to try to fool myself into thinking that my anger was “under control.” I realized that, at least as far as the impact on my kids and my own health is concerned, it’s not possible for me to be “angry a lot” and still “under control.” Being angry a lot means that our anger is controlling us and hurting those around us, especially the ones we love.

Here’s what brain science tells us about anger and how it affects kids. When I’m angry at my son, he feels like it’s his fault. Even for older kids who rationally know better, this is true. When I get angry, even if it’s not directly at him, it creates a brain connection to fear, guilt, and shame. The more often I’m angry, the more that brain pathway is fired and reinforced until it becomes almost an automatic response. Kids will learn to cope with and compensate for this in different ways. Some will seem to do fine. Others will develop anxiety disorders, hesitating personalities, or even post-traumatic stress. Regardless of how well a child learns to cope, the negative brain highways are still there.

This is where I often hear people say, “Wait a minute! I don’t want my kid to grow up being a wimp. He needs to know that when he does certain things, it’s going to make people angry. And he needs to learn how to handle it when somebody get’s mad at him or he won’t be able to take it when his boss lays into him when he’s grown up.”

It’s true that kids need to understand the consequences of doing things that can make people upset. It’s also true that all people need to learn to deal with anger expressed by others. However, trying to teach emotional intelligence to our children by getting angry at them is like trying to slice thin deli meat with a chainsaw: It doesn’t doesn’t get the job done very well and makes a pretty big mess in the kitchen.

I go into some very powerful and effective ways to help kids gain emotional intelligence in another post. I’ll also explain very clearly what we can do to help repair the damage done by out of control anger. We can build positive brain superhighways that are so smooth and nice that the negative pathways created by our anger won’t get any traffic.

← Book Review: Boys Should Be Boys by Meg Meeker
Fun Friday: Go Hunting with Your Kids! →

One response to “Being the Angry Dad”